Tresnuraghes, path to the towers and the Deriu House museum

Places that are accessible without a guide

The reconstruction work on an antique structure dates back to the first half of the 19th century; it was entrusted to the Bosnian architect Antonio Pinna who also oversaw the construction of the high altar. The church has a single nave enriched by four side-chapels, three of which are dedicated to the saints; the first side-chapel on the right houses the baptistery. The main altar is surmounted by the recently restored dome. The dome is decorated with illustrations of the four evangelists, painted by Parma painter Emilio Scherer between 1888 and 1889.
The central nave was decorated in the first half of the 20th century by the Scanese painter Isidoro Delogu.
The neoclassical facade is enhanced by the presence of two bell towers.
Access for the disabled.

Seat of the confraternities of Santa Croce and of Rosario. Adjacent historic cemetery for those who could make special bequests. Wooden crucifix dating back to 1600.

Church of San Lorenzo – Via Roma

The church was built in 1865 by the bishop of Bosa. The bishop also had a gilded wooden altar built but, unfortunately, this has been lost. Architecturally, the church has a single, rectangular nave with a raised altar.
The religious rites of the feasts of San Lorenzo on 10 August and the Madonna del Carmelo on 16 July are celebrated here.

This is a compact, amber-coloured sandy beach interspersed with stretches of lava rock. It extends for about 2km and ends at a large cliff (Sa Pelcia) to the south. The sea is a shimmering blue colour with sandy and rocky bottoms. This beach is very popular with local residents and tourists during the summer. When the sea is rough, the big waves are the joy of surfers.

Places that are accessible with a guide. 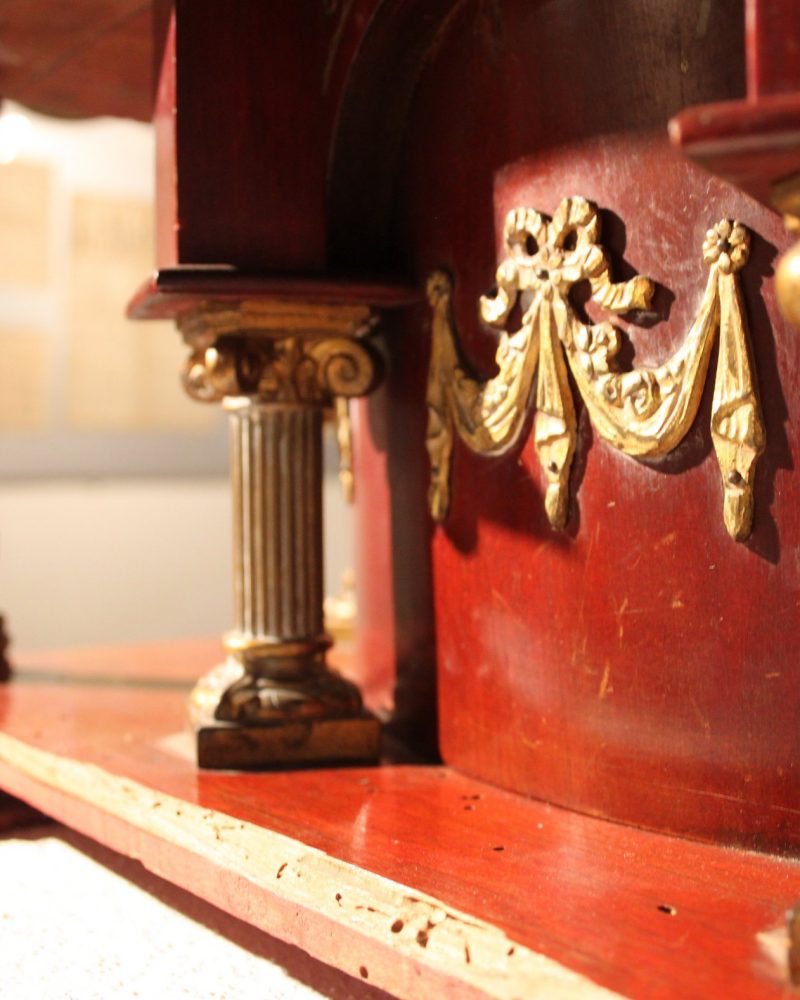 The site of the town’s civic museum was the residence of the village notary from the eighteenth century. On its ground floor today, the museum displays a reconstruction of the rooms, with historical furniture belonging to the house and every day objects belonging to the bourgeois family Zedda-Athene. The upper floor houses a historical exhibition of a vast collection of illustrated nineteenth-century magazines. The magazines offer a journey of appreciation into the family’s tastes and interests, which included current affairs, fashion, satire, literature and universal and national exhibitions.

Foghe: A watchtower located on Punta Foghe at 69 metres above sea level. Built in the Spanish era, it was already in operation in 1572. The structure is made up of two cylindrical bodies of almost identical diameter. Inside, there is a circular chamber, an internal fireplace and a domed vault with no slits. The only opening is the hatch. A staircase built from the thickness of the wall leads to the external terrace from which there is a breathtaking view. The edifice was built with basaltic rock from the area in around round 1580-1590; the arches and the jambs of the hatch are made of red Vulcanite.
Columbargia: This tower stands on a small promontory at a short distance from the beach of Porto Alabe; it was built before 1577. It is the only cylindrical tower in an area where the truncated cone shape prevails. It was built with local material such as basalt and limestone sandstone. Made for sighting the enemy, the tower was equipped with three rifles.
Ischia Ruggia: Located at four kilometres from the Columbargia tower and two kilometres from the Foghe tower, this tower gives the impression of having never been completed.

Reforestation with the aid of forest rangers:

Pine forest and Mediterranean scrub (rock rose, mastic, rosemary, myrtle, strawberry tree and thorny broom). The Tresnuraghes site has a total of 556.63 acres, approximately 516 of which are owned by the municipality. The remainder, consisting of various small plots, is private property. The surface has an irregular shape with vast plains that alternate with small valleys and gullies; it is crossed by several temporary and torrential rivers that underlie limited water catchment areas. The perimeter is accessed by taking the road from Tresnuraghes to San Marco for about 6km.

The Nuraghe Nani is a polylobed nuraghe located on the road leading to the sanctuary of San Marco, a short distance from the town of Tresnuraghes. It has a large village which extends towards the south west and several circular huts can still be recognized. It has not been the subject of archaeological excavations: its current state is the result of several overhauls and diverse occupation over the years, probably until late antiquity.

In the direction of the sanctuary of San Marco, in Mara Pala, on the right of the road, is the su Jù Marmuradu petrified yoke structure. It owes its name to a local legend: it is said that a farmer who did not stop working during the San Marco procession was turned into stone with his yoke.
The monument is probably a dolmen or, rather, very simple funeral monument. It is formed of two stone slabs stuck vertically in the ground. There was a third slab covering it, but this has now disappeared.

The mill was designed to produce paper but, after years of work from 1809 to 1816, it never came into operation and was abandoned. It is located in a beautiful valley on the slopes of the San Marco hill, between the municipalities of Tresnuraghes and Sennario The place was probably chosen because of its proximity to a navigable rio, the rio Mannu. The building’s interior has undergone some collapse, but the external windows, the arches and a gallery about 40 metres long remain intact. The entire structure is surrounded by vegetation that grows luxuriantly all around and inside it.

Excavated into a side of the San Marco hill, these pre-nuragic tombs are also called Furrighesos (small ovens). Such tombs were excavated into soft rock from 3,000 BC. until the first centuries of the second millennium.

This site uses cookies, including third parties, to send you advertising and services in line with your preferences. If you want to learn more or opt out of all or some cookies click here . By closing this banner, scrolling this page or by clicking any of its elements consent to the use of cookies. Ok